Otis Clark was born February 13, 1903 in Meridian, Indian Territory. He grew up in Tulsa, Oklahoma. To say he had an interesting life is a great understatement. On May 30, 1921, the worst race riots in American history broke out in Tulsa. Clark was a witness to the destruction. His house was burned, he was shot at and his step-father was one of the more than 200 African-Americans missing after the riots. Thirty city blocks of Black neighborhoods were burned and at least 38 were murdered.

Shortly thereafter, at age 19, Clark fled Tulsa on a train bound for California to look for his biological father. He survived 20 days in a California jail for bootlegging and selling illegal whiskey. Later he was married and found employment in Hollywood as a butler. He worked as a Hollywood butler for movie stars Clark Gable, Charlie Chaplin and Joan Crawford.

Based on a spiritual dream to become a preacher doing the work of God, Clark later became an itinerant evangelist traveling the United States and the world on behalf of the Church of God In Christ. Officially ordained as a minister in 1946, Clark was the oldest living practising evangelist and remained in good health until his death.

Clark came to Azusa Street very late in the life of the mission and decades after the revival had ended. After Seymour had died, Clark helped bring some stability to the declining work in Los Angeles.

In his later years, he travelled with Gwen and Star Williams his "adopted" daughter and granddaughter. Bishop Clark died on May 21, 2012 at the incredible age of 109 years old.

This is a photo of Bishop Clark praying for Dr. Larry Martin in 2007. 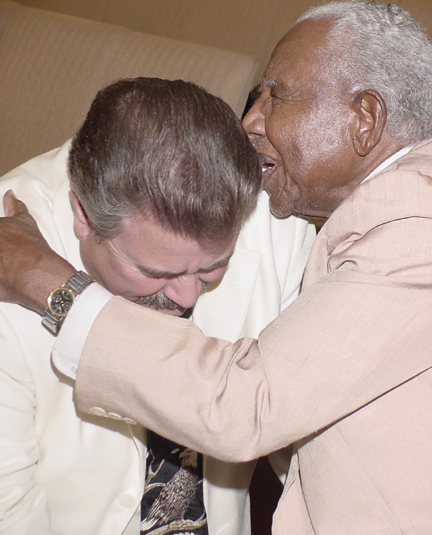