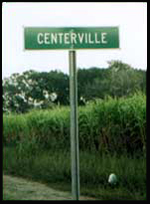 Welcome to Centerville, Louisiana the birth place of William Seymour. Cenerville is a sleepy little village on the Bayou Teche in St. Mary's Parish, Louisiana. The town is located south and west of New Orleans. Sugar continues to be a principle crop in the area as it was in Seymour's childhood. This is illustrated by these feilds of cane near the town's welcome sign. 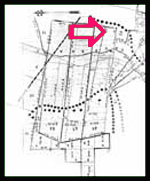 Seymour was mostly likey born in this house. At the time of his birth, this was the former slave house on the Adilard Carlin plantation. His parents continued to live here after they were married.

An early photograph of the Roman Catholic Church in Franklin, Louisiana where Seymour was baptized on September 4, 1870. Seymour's parents were married by a Methodist minister; they took all of their children to the Catholic church for baptism; and, they were buried in a Baptist Church cemetery.

William Seymour's actual baptismal record. He was baptized by Father M. Harnais. At the time of his baptism he was known as William Simon.

Centerville, Louisiana in a very rare sketch from Frank Leslie's Popular Magazine in 1881. Federal troops still occupy the village. Seymour was eleven years old when the sketch was drawn.

A Louisiana sugar plantation similar to one where Seymour was born. He was five years old when this engraving appeared in Harper's Weekly on October 30, 1875.

This one-room log cabin owned by a black family in the reconstruction south is very typical of the house where William Seymour was reared as a child.. As was the case in the Seymour cabin, the cooking is done outside the house. 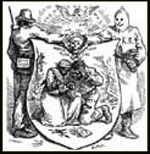 This engraving from 1870 (the year of Seymour's birth) shows the racial prejudice and hardships that a black family faced in the Reconstruction South. The suffering family kneel over their new-born child. A caption on the sketch says, "Worse than slavery."

To learn more about Bishop Seymour and the Azusa Street revival read The Life and Ministry of William J. Seymour by Larry Martin, available from our online bookstore.(Click the title for ordering information). With 350 pages and over 100 illustrations, this is the most comprehensive book ever written on the great outpouring.

To Continue reading the Azusa Street Story, click any link below: