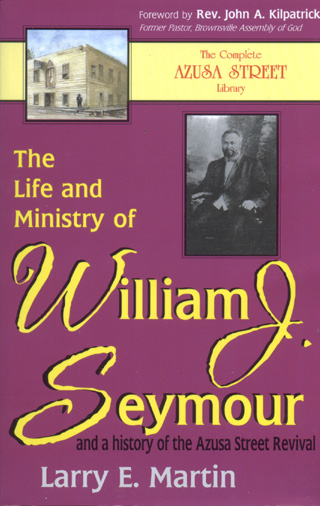 The Life and Ministry of William J. Seymour


The Life and Ministry of William J. Seymour is the first fully researched, major biography of the pastor of the Apostolic Faith Mission at 312 Azusa Street in Los Angeles, CA. Beginning in 1906, Seymour hosted a revival that spread the Pentecostal message around the world. In 1999 religious newswriters voted the Azusa Street revival as one of the ten most important religious events of the millennium.

Seymour has been called the most influential black religious leader in American history. Born in 1870 in Centerville, Louisiana, Seymour's parents were both former slaves. His father was a union soldier in the Civil War. Seymour was reared in the poverty and oppression of the reconstruction south.

Seymour left the south and lived in Missouri, Indiana, Illinois and Ohio, usually working as a hotel waiter. He was baptized as a Roman Catholic, converted in a Methodist Church, and then joined the Church of God Reformation movement. In 1905, he encountered Charles F. Parham in Houston, Texas and embraced the Pentecostal doctrine.

Arriving in Los Angeles in February 1906, Seymour was locked out of the church that had called him to the city to preach. In April, a Pentecostal outpouring led to the establishment of the mission on Azusa Street. Seymour spent his later years at the church in Los Angeles and traveling to spread the message. He died in 1922. This work looks at every area of Seymour's life and gives considerable attention to the revival that made him famous.

The book contains 380 pages, has over 100 illustrations (including never before published photos of the mission), and an index.

Click Here to Return to the Bookstore Main Page