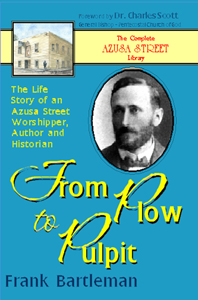 "From Plow to Pulpit" tells the story of noted Azusa Street historian, Frank Bartleman, before the Pentecostal revival began in Los Angeles. This book, volume ten in the Complete Azusa Street Library, actually contains two of Bartleman's autobiographical works, "From Plow to Pulpit" and "My Story: the Latter Rain." The reader will learn of Bartleman's childhood, his conversion and his call to ministry. Bartleman faced many struggles as he preached the gospel under many severe circumstances. Through it all, Bartleman overcame to be an effective gospel preacher. Anyone interested in the Azusa Street revival will want to know the whole story of the author who faithfully reported the move of God to the whole world.

Frank Bartleman is best know for his book, "How Pentecost Came to Los Angeles." The classic book on the Azusa Street Revival in Los Angeles has been reprinted under various titles including "Another Wave Rolls In" and "Azusa Street." Early on Bartleman was a Baptist evangelist. He travelled throughout the US, including a trips on D. L. Moody's Gospel Wagon. In 1906, Bartleman became an eye-witness to the Pentecostal outpouring in Los Angeles. He published many tracts and periodical articles promoting the revival. Before his death, Bartleman travelled around the world preaching the gospel.

The book has 243 pages with a number of photographs from Bartleman's life.

Click here to return to the main bookstore page.